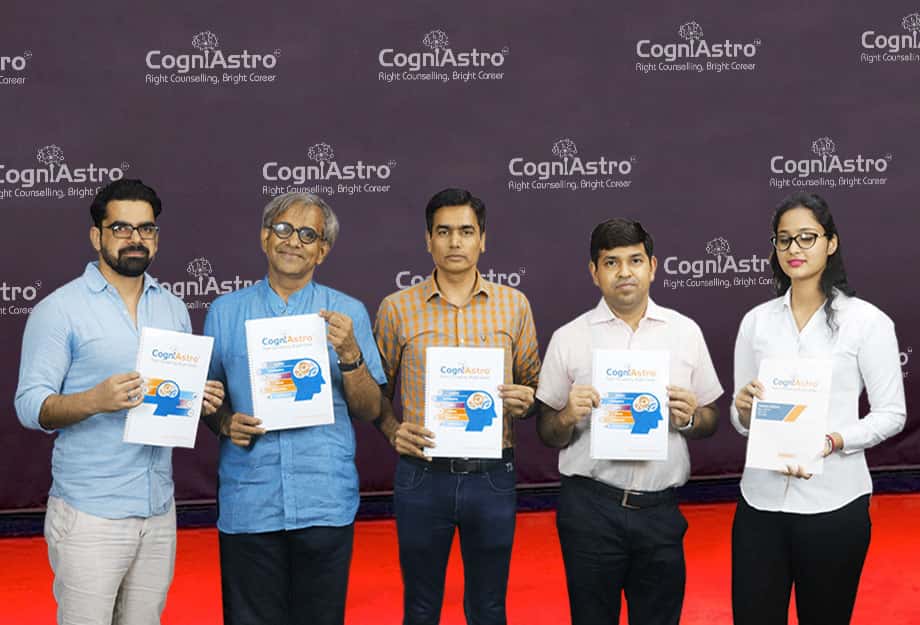 What can be better than knowing, while still studying at school, which field has the highest probability of bringing you immense success and creative satisfaction? However, this does not happen in most cases and this is probably the reason why India consists of the biggest number of unsatisfied professionals. But now, all this can change! The world-renowned software company, Ojas Softech, is beginning to offer Career Counselling for students with Astro-psychology as its nucleus. Meanwhile, on Sunday, CogniAstro, the astropsychology based career counselling report, was launched at the company’s headquarters. On this occasion, along with the company’s CEO Punit Pandey, noted personalities such as Sayeed Ansari, a well-known journalist, and actor Imran Hasnee, who has worked in numerous movies like Paan Singh Tomar and D-Day, were also present.


CogniAstro is a unique career counselling report in itself, which informs students of the fields that they should choose to achieve both success and satisfaction. While talking about CogniAstro, CEO Punit Pandey was quoted as saying, “World’s great psychologist, Carl Jung gave many significant theories to the field of psychology. We worked upon these concepts while infusing astronomical mathematics to come up with groundbreaking research, which gave us ‘CogniAstro’. This astropsychology based counselling report that we have created offers 98% more accurate information to the students than the existing psychology-tests based reports, advising them on which field they should choose to build their career.

It should be noted that according to the CEO of the world’s prestigious survey company Galup, Jim Clifton, only 8 to 10 percent of the people in India are satisfied with their jobs. As per him, the direct effect of this dissatisfaction can be seen on the GDP of the country. These statistics differ in various surveys, however, in every one of them, it was obvious that maximum percentage of people satisfied with their profession was 20 percent. With CogniAstro, we are planning on evidently spiking these numbers for the best. Senior TV journalist, Sayeed Ansari spoke on the matter as well, and said, “Today, there is a tremendous academic pressure on students, but career selection is not based on their creative ability. As a result, they start feeling pressured, stressed, and confused after they get into a profession. The wide range of career prospects described in CogniAstro through astropsychology is surprising.”

This report describes everything in detail, ranging from the subjects students should choose, to the profession which will bring them the most success. On the Launch Ceremony of CogniAstro Report, the eminent professor of Delhi University and satirist Dr. Alok Puranik said, “The perusal of both astrology and psychology is instrumental in the creation of one’s personality. However, no one has ever tried career counselling by basing their research on these two genres. CogniAstro is a prodigious experiment in this way.”

The well-known Hollywood and Bollywood actor Imran Hasnee was quoted as saying, “Today, people do not want to work in the fields that they are currently building their career in. However, the problem resides in the fact that the education they have received does not allow them to move into any other field of their choice. Therefore, the significance of astropsychology based CogniAstro report increases even more.”

It is notable that the blend of psychological and astrological concepts that CogniAstro is based upon, AstroSage has been working on and tested the same for years in their labs. The report is currently available online.